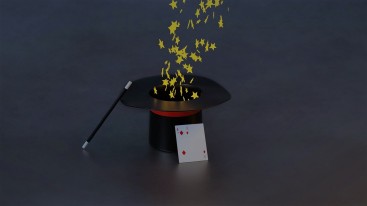 This afternoon, my 9 year old daughter rediscovered her Magic Set, a gift for her birthday some years ago. A happy hour or so followed this discovery as she relearned and performed some old tricks. Tricks made trickier by her dyspraxic brain, we none the less cheered and applauded her with “wow” and “amazing” and “how did you do that?” Ignoring a dropped card here and there or the not so slight of hand that kept revealing its secrets, we allowed ourselves to be thoroughly entertained by her enthusiasm and joy.

We smiled as we recalled her much younger self with the same magic wand. Sent to her room for some misdemeanour or other, she slammed the door, waving her wand as she did so, shouting those magic words “abracadabra, make everything MY WAY!” Her foot stamping in time with the last two words.

In a year when she has discovered that Santa isn’t real and the tooth fairy is not to be trusted, you’d be forgiven for thinking that our house is now devoid of magic.

In the words of CS Lewis, there is a magic deeper still…..

It has nothing to do with fairies or elves, magicians or illusionists.

Before I was a mum I would imagine magical moments like this: happy parents swinging their toddler on the count of three as they walked along a path to a park. A familiar scene, but one that, in reality, never happened. Neither of our children could walk when they were toddlers. The shout it from the roof tops moment when my first born took her first steps as a 3 year old was soon eclipsed by another. The deeply personal moment she stood up at home, later that day, and whispered proudly to herself “I can walk”.

The magic happens when we least expect it. Like it did yesterday.

Yesterday, Hazel walked hand in hand with us, her parents, very slowly along a path for the first time in her life.

Nothing remarkable or magical to the untrained eye. To the non believer, there is nothing to see.

Hazel is my almost 7 year old daughter who has Down’s syndrome and cannot walk by herself. Hazel is wheelchair dependent.

And, just a few days earlier, this same magic had appeared at bath-time. Her favourite toy that blows bubbles and plays a tune had stopped working. The bubbles had run out. A regular occurrence. Usually Hazel would simply turn away and look for something else to play with. Not this time.

Magic was in the air.

She turned and looked up at me. Directly. Urgently.

Mum you need to fix this for me she said.

Except she didn’t say a word. She can’t. She does not yet have the words to tell me when something is wrong or when she wants something.

But she looked at me. For the first time in 7 years she told me what she wanted by looking at me.

I’ve been taking a break from blogging and some social media recently. Not because I don’t like it, the opposite is true. But having my head in a screen as often as I was meant I was in danger of missing the magic. I want to be fully present in these moments. They are a long time in coming and all the more magical because of that.

When a child reaches a milestone it’s always a magical moment.

When a child or person with a disability reaches a milestone, or does something they have never done before it is beyond magic.

CS Lewis, The Lion, The Witch And The Wardrobe.

© Alison Morley 2021 – Photos and text may only be used with permission.

Just a girl chatting from the heart…x

Even when things are complicated they can be gorgeous

running the race that is set out before me

Evie's world is a wonderful place to be...

Musings of a SEND mummy
Under Reconstruction

Hope isn't an emotion, but a daily choice.

The Diary of a Not So Ordinary Boy

My world, its ups and downs

The Art and Craft of Blogging

The latest news on WordPress.com and the WordPress community.